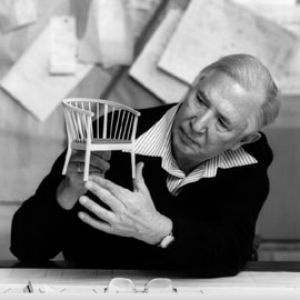 Hans J. Wegner was a carpenter and graduated from the famous 'School of Arts and Crafts' in Copenhagen. Not only was he one of the most productive designers, but also one of the most innovative in the Scandinavian and global field. His work represents the beauty of perfection in carpentry and focuses on modern life. His work has become contemporary classics of a great modernity!

He is one of those responsible, together with Arne Jacobsen, Finn Hulh, Poul Kjaerholm and a few others of our "aesthetic education".

All of them were commissioned half a century ago to design in Scandinavia a series of furniture so beautiful and so comfortable that today, half a century later and already in another century, they are claimed as symbols of the modern.

Wegner has been one of the main pillars of Danish design, which is the same as the European design of the 20th century.

His contribution consisted in softening even more the warm lines of the Nordic design and in giving a fragile air to complicated and robust structures. Like his generation colleagues, Wegner turned the difficult into easy.