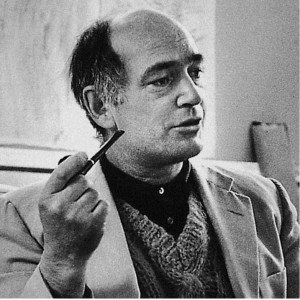 Painter, graphic artist, sculptor, university professor and furniture designer, American born in Italy. He is famous for designing the Diamond Welded Rod Chair that was patented by Knoll International in 1952.

Harry Bertoia trained at the Detroit Society of Arts and Crafts and later at the Cranbrook Academy of Art in Bloomfield, Michigan, where he later became a teacher and formed the metal works department. During that time, he began experimenting with jewelry forms and exploring ideas that would later emerge in his sculpture.

In 1943, he moved to Venice, California, and worked with designer Charles Eames until 1946. In 1947, he moved to La Jolla to work at Point Loma Navel Electronics Laboratory in the publications department creating equipment manuals. During this time, he continued to make jewelry and mono-engravings and began his first sculptural experiments.

In 1949, he moved to Barto, Pennsylvania where he joined Hans Knoll at Knoll Associates. He became a prolific architectural sculptor. His first assignment was a screen for the General Motors Technical Center in Warren, Michigan. His first sculpture exhibition was in 1951 at the Knoll Showroom in New York.

He had a habit of not signing his works, since he believed that the piece itself was a signature, that what he created belonged to the universe and that a signature called attention to the artist rather than to the work.